LIC lays claim to no.1 spot in settlements : MUMBAI: Life Insurance Corporation remained well ahead of private rivals in living up to the purpose of insurance by settling 97.03% of claims in 2010-11, helping the state-run giant retain its market dominance even a decade after its monopoly ended.

Settlement of claims at LIC rose from 96.54% in 2009-10, the Insurance Regulatory and Development Authority said in its annual report. For the private sector, where the premia on policies are lower than for LIC, the claims-to-settlement ratio was 86.04%, up from 84.87% in 2009-10

Higher the ratio of settlement to claims, the more customer-friendly a company is. The regulator does not provide statistics for individual private firms.

“Insurers should take all steps to ensure the incidence of claim repudiation is reduced to the barest minimum,” the regulator said in its annual report. “For this to happen, they should adopt measures to explain

to the parties upfront the exact coverage and exclusions.”

LIC, which controls nearly three-fourths of the market, scored on another front: its repudiation of claims declined to just 1% in FY11, from 1.21% a year earlier. The remaining claims are under dispute. For private life insurers, repudiation rose to 8.90% of claims from 7.61% in FY10.

Settlement of claims is the key factor that decides customer satisfaction and a company’s profitability. While genuine claims are usually settled by both private insurers and LIC, private players see more disputes. Stricter due diligence means more fake claims are detected at private companies, while LIC is relatively lax in rejecting fake claims, reducing its profitability.

“Insurance is not what you sell, but deliver,” said AK Dasgupta, MD, LIC. “People trust LIC because of our strong claims settlement record. They know we have the ability because of our balance sheet and intention. People need insurance for two reasons – uncertainty and good return.” 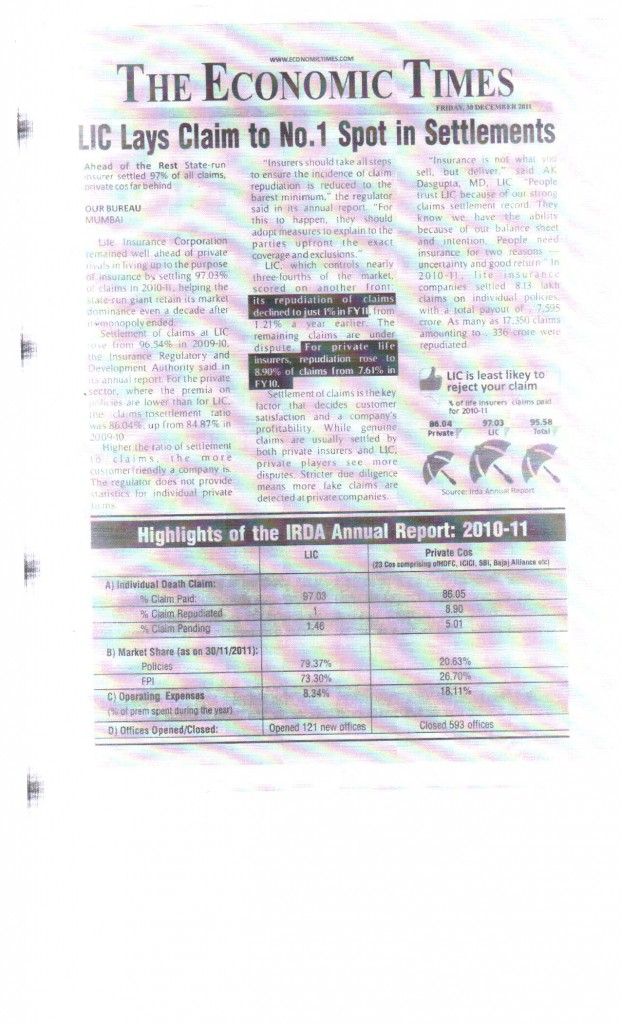 1 Comment on "LIC lays claim to no.1 spot in settlements"